Modern take on “Mamais and Their Women” 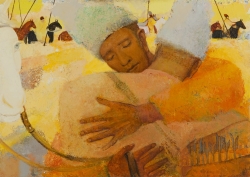 Let us recall that the internationally known young painter had her first solo exhibition in Ukraine in July, 2013. Den covered Kosianenko’s display at the Triptych Gallery which included works from the “Obolon Saints” series and paintings from different periods of her creative activity. Her cycle “Mamais and Their Women” was exhibited at Cherkasy Regional Art Museum, and now it comes to Kyiv.The cycle was launched in 2006. Two works from it won the Lorenzo de Medici prize and Medal at the Florence Biennale, a forum of contemporary art. The artist is still working on it, supplementing her early pictures with new paintings. Her first Mamais were male portraits combining traditional images with modern realities, Ukrainian traditions and myths with today’s understanding of human condition. The 17th century as pictured on the canvas reflects experience of all the subsequent eras. Kosianenko’s first paintings were mostly brown-colored, but she later added blue, red, and dark blue to make them as colorful as life itself.

Female figures of Mamai women came to the cycle later, too, serving as bold protective spirits for their men. They symbolize the home wealth and beauty of the Ukrainian women. The characters’ surroundings were meticulously selected, including the main details and nothing more. As tradition commands, Mamais sit holding kobza, often popularly called bandurka, despite bandura being a completely different instrument. Background includes countryside landscape and lonely horse. The woman is depicted with an embroidered towel, because she is primarily Mother (and thus is holding a child, the future Mamai), and, of course, Wife, since mother influences man in his early years, but wife replaces her later on.

This year’s paintings depict the Cossacks’ natural habitat, now deserted by them. Maybe this is our time, where there are no Mamais left, just nature remains as evidence of their former presence here. Lonely tree stands beside evening bonfire on Coming of the Night painting, as if Mamais now traveling in our memory have just left it. Milky Way depicts endless starry sky, not quite the night one, but definitely not daytime one either, a twilight one. The transition between day and night reflects changes and new take on traditions. The space is endless, as stage designer and philosopher, a teacher of Kosianenko Daniel Lieder taught. The painting has a little man standing somewhere under the trees, a microcosm beside the macrocosm… Floating Boat is the most generalized and mysterious painting, as it is almost abstract and almost monotonous, making one wonder about the infinite tradition existing in this country, its great importance, its impact on the Ukrainian culture and, specifically, its impact on Ukrainian painting.

Kosianenko’s original works confirm that the Ukrainian tradition is alive. Almost effortlessly, the artist seeks to express our rich Ukrainian history via a new aesthetics. 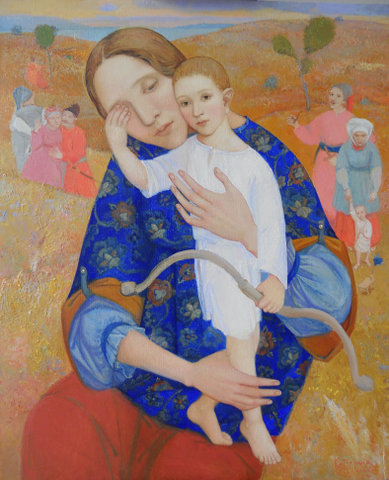 THE CYCLE “MAMAIS AND THEIR WOMEN” WAS LAUNCHED IN 2006. TWO WORKS FROM IT WON THE LORENZO DE MEDICI PRIZE AND MEDAL AT THE FLORENCE BIENNALE, A FORUM OF CONTEMPORARY ART. THE ARTIST IS STILL WORKING ON IT. PICTURED: LITTLE MAMAI PAINTING