“Ukrainians on the Côte d’Azur” Festival 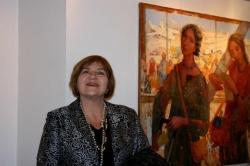 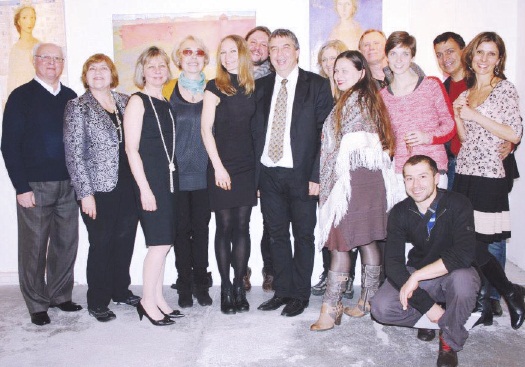 In January of this year I had the great pleasure of attending a Ukrainian cultural festival in Nice, in the south of France, of all places! This Cote d’Azur area, as it is widely known, has always attracted prominent figures of culture, and Ukrainians are no exception. Few people are actually aware of the prominent role that Ukrainians played in the French society of the late 19th and early 20th Century. “Having been part of the Russian Empire and later part of the Soviet Union, Ukraine witnessed its culture being marginalized, and its representatives [were most often] grouped as ‘Russians’”, says Dr. Natalia Burianyk, organiser of the new cultural event on the French Riviera. It is only since Ukraine gained independence in 1991 that we are reclaiming our legacy and familiarizing the world with Ukraine and its cultural accomplishments. According to Dr. Burianyk, the goals of the festival were to introduce residents of the Cote d’Azur to some contemporary Ukrainian culture as well as to pay homage to the Ukrainian legacy in the area.

The festival was organized by Matrix Orange, a cultural organization based in The Hague, Netherlands, and whose head is Natalia Burianyk, of Ukrainian-Canadian origin. In 2010, I had the honour of assisting Natalia with a festival in The Hague, showcasing the literary and artistic work of contemporary Ukrainian women, so I was not at all surprised that her creativity led her to organizing this event in Nice. The festival, which took place January 15 to the 29th, 2013, was dedicated to perhaps the most famous Ukrainian Niçoise, Maria Bashkirseff, whose family were Ukrainian aristocrats from the Poltava region. Bashkirseff was an artist, author of famous diaries, and one of the first French feminists. Her paintings hang in the Musée d’Orsay in Paris and the Beaux Arts Museum in Nice, and her diaries have been translated into many languages. Bashkirseff’s exchange of letters with famous French writer Guy de Maupassant was the basis for a play produced especially for the festival Marie Bashkirseff: Journal In Time by Frédéric Rey, Nice writer and director of La Semeuse Theatre. This year marks the 155th anniversary of Bashkirseff’s untimely death at age 26. 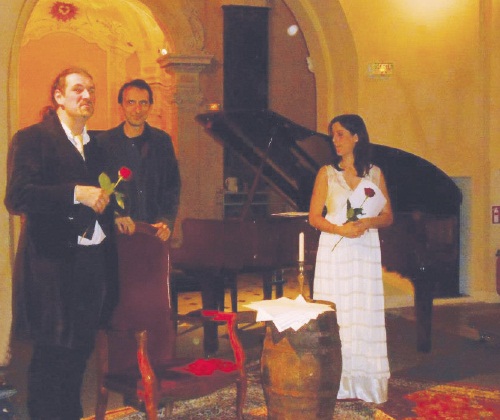 Other famous Ukrainians who left a mark in the Côte d’Azur include writer Mykola Gogol, photographer Leo Mirkin, and the artist Johanna Winnyky. Ukrainian princess Elisabeth Kotschoubey in 1878 built a magnificent residence in Nice but did not actually live in it and the building now houses the Beaux Arts Museum. The famous French sculpture Michel de Tarnowsky, whose beautiful sculpture of Maria Bashkirseff can be found in the Beaux Arts Museum, also had Ukrainian roots. Perhaps most surprising to me was the fact that Volodymyr Vynnychenko, playwright, artist, political activist and Prime Minister of the first Ukrainian government after the October 1917 Russian Revolution, lived in the area and is buried in nearby Mougins on the Côte d’Azur.

The festival’s opening took place at the Providence Cultural Centre, and included a photography exhibition by the art group Absinth Reality from Kyiv and a fashion show by Ukrainian fashion house RITO. Models from Ukraine as well as some who were locally recruited showed us the Côte d’Azur collection which had been specially created for the event. Another highlight was an exhibit of paintings by artist Kateryna Kosianenko in the Dominican Art Gallery, directly across from the Nice Opera. Kateryna, one of Ukraine’s most promising artists and the winner of several artistic awards in France, was present for the entire two week exhibit. During this time she created a beautiful icon as a gift for the Dominican friars who hosted the exhibit in their gallery and who were one of the sponsors of the festival.

Another event, honouring contemporary Ukrainian writers, took place at Nice’s Louis Nucéra Library and featured a presentation in Ukrainian with French translation, by Larysa Denysenko, author of several popular books that have been translated into many languages. As well as introducing us to her works, Ms. Denysenko spoke about the current state of publishing in Ukraine and the lack of support and funding, especially for books written in the Ukrainian language. Since Ukrainian independence, greater freedom and openness has led to writing about subjects that were taboo under the Communist regime. Access to foreign authors and to previously banned works by Ukrainian writers of the 1920s and 30s as well as literature of the diaspora have spawned a great diversity in contemporary Ukrainian literature. This literary event was sponsored by Glagoslav Publications, an independent British-Dutch company specialising in the publication and worldwide distribution of English translations of books by Ukrainian, Russian and Belarusian authors. The publishing company’s president, Maxim Hodak, a lawyer originally from Lviv, spoke both about the challenges of publishing books today and about Europeans’ interest in Eastern Europe and in Slavic Literature.

A jazz concert at local night spot Shapko, a tour of the “Russian” cemetery to see monuments and gravestones of Ukrainians buried there, and a bus trip to nearby Monaco were other highlights of this two week-long event which attracted participants from Canada, France, England, The Netherlands, and Ukraine. Dr. Burianyk, when asked about her overall reaction to the festival, stated “All of the Ukrainian participants, despite the political and economic mess in their country, lack of funds and difficulties with visas, felt very strongly about coming to Nice to share their work with the local community. I am in awe of their love of creativity and devotion to art, and this fills me with hope for Ukraine.”

I, in turn, am in awe of the creativity and devotion to art of Natalia Burianyk and the Matrix Orange group, and wish them great success as they proceed with their next project, the forming of a branch of Matrix Orange on the Côte d’Azur.