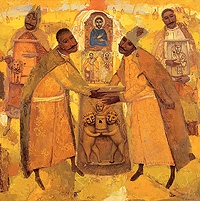 To stretch the bridge above a dark chasm of nonexistence, ignorance, misunderstanding, inspirituality by a life, knowledge, understanding and love. It is the purpose of art and a calling of the artist. To open eyes that who does not notice beauty of the clear dark blue sky, blinking of eternal stars above the small white house which as if was lost in space and time. To help to hear and understand a sad Ukrainian song which flows above the native ground, above improbable, fine landscapes. To understand century popular wisdom, to penetrate into consciousness, to accept simple both simultaneously ingenious images and ideals fine, the embodied in eternal and wonderful products of a folk art. Violence of paints, connection hot red (color of beauty, blood, fruits, colors) with grief black, brown (colors of the ground – wet nurse) and cleanliness of a dairy – snow canvas – a unforgettable image of the Ukrainian national historical suit. What perfection and harmony in the magnificent embroidered flower bouquets scattered on magnificent sleeves of linen female shirts, what constrained perfection and cleanliness in an interlacing of geometrical ornaments of embroideries, web asterisks and squares on the plahta and strips on the zapaska, bright tapes in plait, wonderful wreaths on heads of girls, motley expressiveness and fancifulness of fabrics. A perennial spring of inspiration for the artist. Kind eyes, benevolent persons of simple people. They are your children, Ukraine. They peer at our today’s life from old photos, national pictures, church lists, pictures of the Ukrainian artists of the past. They are almost we, our roots, our past. So it is much lost, forgotten. It is very important to return, recollect, save up, revive. That our people has not turned to the nation without memory, without a history, without traditions, without soul. That we knew, today’s, as well as that referred to, for what and as it was done{made} that the magic string which connects generations did not interrupt.

For this purpose it is necessary to save up not only samples of a folk art, but also folk customs to know and remember calendar ceremonies in which originality was brightly showed, an originality of Ukrainian people. Customs are embodied in actions and movement attitude, canons of dialogue between people. And these mutual relations directly influence spiritual culture, on process of formation of national creativity and creativity of professional artists.

The Ukrainian calendar ceremonies and customs are closely connected to a cult of the sun (memoirs on the pre-christian pagan past, with very important for the Ukrainian peasant field and kithen garden’s works) on the one hand, with another – with Christianity holidays which became for Ukrainian people very much major landmarks of a life. Their celebrating is always connected to ethnographic features,  customs. In them church elements were closely bound and стороукраинские, family and християнские. Old Ukrainian customs have become ingrained our customs. We and now do not represent Christmas without kutya, Easter without pisanka, Trinities without an ornament of a house greens, not without reason this holiday refers to « Green holiday ». All of us celebrate a holiday Bathed, on Introduction we call happiness the next year, in day of Ekaterina we guess, asking destiny about the future. In this synthesis of traditions and beliefs originality and wisdom of Ukrainian people was showed.

Modern Ukrainian artists have started to address gradually to the themes, connected with folk customs, ceremonies, celebrating of Easter, Christmas. The national union of artists of Ukraine started to carry out{spend} the national exhibitions devoted by it Christianity to holidays.

But there can not be recurrences in art, even when some artists touch one theme. My plan includes in creation of a cycle of the original picturesque works, devoted to calendar ceremonies Ukrainian, I want to show them widely and substantially, concerning not only well-known themes and the facts, I intend to show little-known and interesting aspects of this theme. I aspire to make the painting close to a folk art, having transformed national attitude in products of modern, original painting, making a start from national ideals fine, in own way to treat the world of national representations and imaginations, making use of experience of the artist and the set designer. In the products I use subject compositions with elements of national clothes, a national life, subjects of a life, products of arts and crafts.

The creative purpose of this cycle – creation of the images connected to the Ukrainian olden time, full display of a cycle of calendar ceremonies. It should be synthesis of a picturesque genre art, elements of decorative art and elements of the Ukrainian baroque icon (as most interesting national page in the fine arts), the Ukrainian national picture and lists of wooden temples of Carpathian mountains. At products there will be angels, the Savior, the Virgin loved{liked} by Ukrainian people sacred – Nikolay, Кatarina, Barbarian. In Ukrainian icon-paiting it is images of almost real people. Created by national masters, icon painters, they bear{carry} on themselves a print of a real life, real people, which images artists found among the environment. Violence of color of style of a baroque, multi-coloured fantastic flowers, carved gilded backgrounds, magnificent clothes, beauty of fabrics, nobleness and expressiveness of persons also are attractive for imitation.

The moments of calendar ceremonies will be submitted as a leaf of a calendar, his{its} key, most expressive moments or absolutely insignificant, forgotten, quiet. Sensations of the modern person, the artist will be transferred{handed} to them (through color, treatment of images, plots), features of an originality of the Ukrainian culture, mentality, spirituality. My purpose – through the image of the past in the picturesque products devoted to Ukrainian people to promote becoming of spirituality of the modern person. Let it will be one step, but it is a step in the future.

All Ukrainian holidays have very poetical ceremonies, customs, they are necessary for fixing, keeping in memory. Clearly, that language of spatial arts – one of melodies in polyphonic sounding voices of other kinds of arts which directly display elements of ceremonies and customs: oral national creativity, singing, dance). But language of painting is very expressive and poetical. Painting is capable to fix, represent the most poetical, most interesting plots, to introduce new philosophical judgement, in own way to treat, create bright symbolical images, images – reflections.

I have chosen from a lot of the Ukrainian holidays for the first stage robots: New year, the Lady day, Easter, the Trinity, Ivan Kupala, Has rescued, Christmas, the Cover.

The art purpose of creation еpic the picturesque cycle made of products – parables – creation of the original picturesque encyclopedia of Ukrainian people, his{its} life, ceremonies. The concept of products – preservation of traditions of olden time, but with selection important for me as artist, treatment their original, nonconventional. One more purpose of my work – educational. I want to set the spectator thinking and become interested in the past, to admire with beauty, to connect the past and the present of Ukraine.

First steps to creation of a cycle it are made, created a number{line} of the works connected to this subjects. They were exhibited at national exhibitions, at my personal exhibition « August. An echo », which passed in the Ukrainian fund of culture in 2003 (a cycle of picturesque works of ” Shadow of the forgotten ancestors »), on Moskovsk the international salon of 2003 it was exhibited a picture “Wedding”, on Autumn Salon in Paris in the same year spectators have seen a picture of “Intercession”. Actually, “Intercession” the first work of a cycle, which first stage I plan to finish in the autumn of 2005.