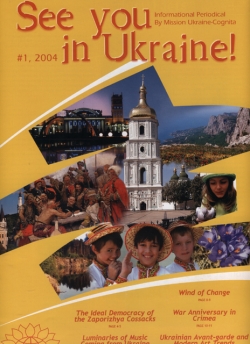 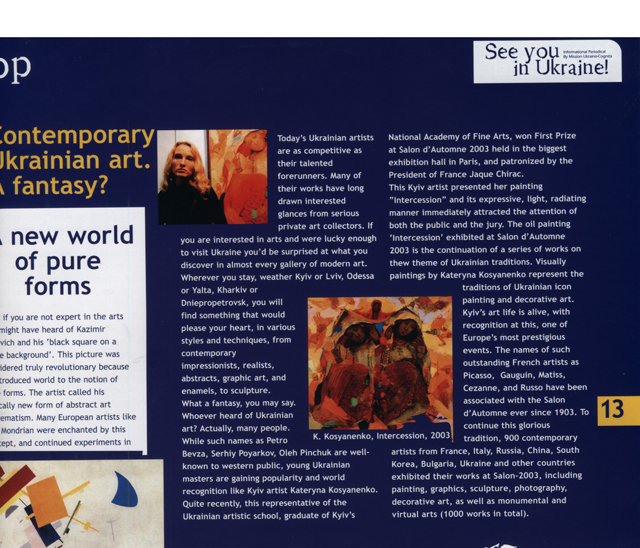 Kateryna Kosyanenko, representative of the Ukrainian artistic school, graduate of Kyiv’s National Academy of Fine Arts, was awarded First Prize at Salon d’Automne 2003 held in the biggest exhibition hall in Paris , and patronized by the President of France Jaque Chiraq, Minister of Culture of France Jaque Aillagon, Mayer of Paris Bertran Delanoe.

Names of outstanding French artists such as P. Bonnard, P. Picasso, P. Gauguin, A. Matiss, Cezanne, A. Russo and others are associated with the Salon d’Automne and are part of the treasure trove of world’s culture.

The retrospective part of the show 2003 was dedicated to the posters by world known masters that have been advertising the Salons starting from the very first one in 1903.

Kyiv artist was represented by he painting “Intercession” which expressive, light radiating manner immediately attracted the attention of both the public, and the jury. The First Prize was awarded to the painting, and to the young artist, as well as the high level of the Ukrainian artistic school has been noted.

The painting “Intercession” exhibited at Salon d’Automne 2003 is the continuation of the series on the Ukraine-related topics, Ukrainians’ calendar rites, to be exact. Visually, the paintings by Kateryna Kosyanenko represent the high tradition of the Ukrainian icon painting, and decorative art. Her works were noted as interesting artistic authentication and a new vision of Ukraine ’s history by the contemporary artist.